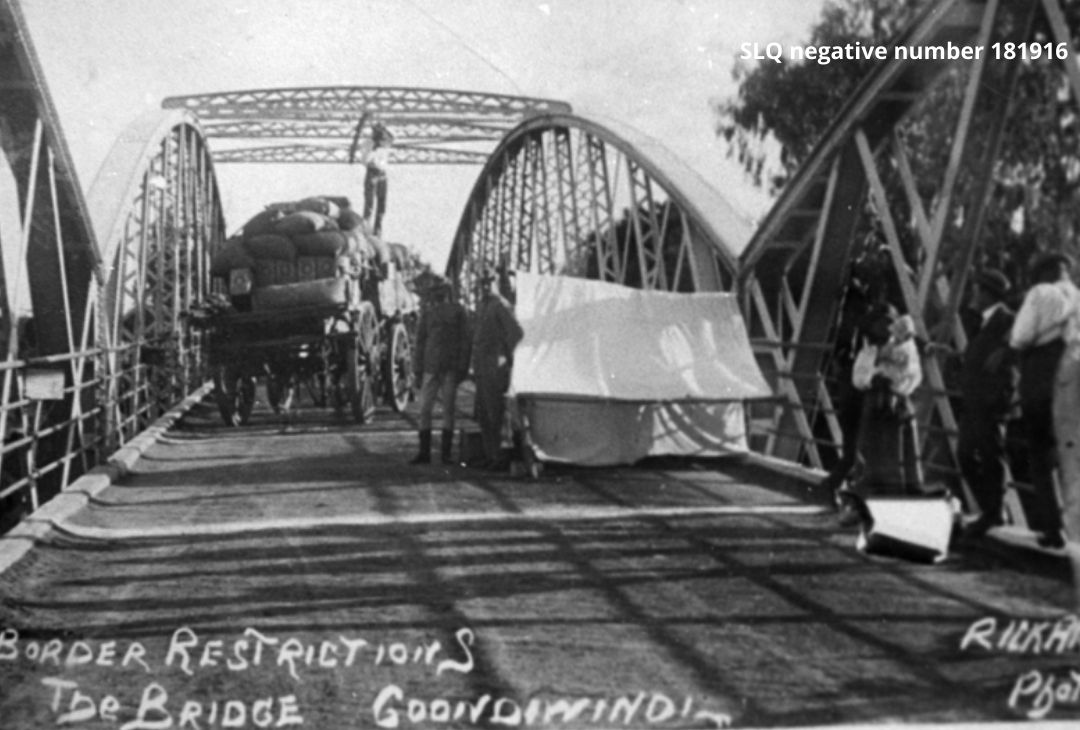 Treading lightly on the border during Qld’s influenza pandemic

Treading lightly on the border during Qld’s influenza pandemic

When it comes to influenza, state borders have been subject to controls before. But why is there an array of footwear on this Queensland border bridge? 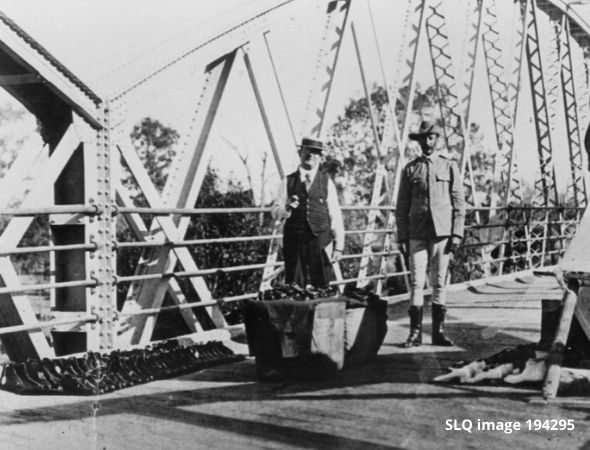 The bridge over the Macintyre River at Goondiwindi was one of the border crossings manned by Queensland police in 1919 during the influenza outbreak that followed the First World War. The steel bridge, completed in 1915 at a cost of £12,325 paid jointly by Queensland and New South Wales, served as the control point between the quarantine camps staffed by doctors that had been established at Goondiwindi in Queensland and Mungundi in New South Wales. At either camp, the travelers of 1919 spent seven days before continuing on their journeys.

This, the second Macintyre River bridge, was built during 1914-15 by Lismore firm Oakes and Oakes. It consists of two hogbacked lattice spans each 120 feet (36.5 metres), braced overhead with steel lattice bracing. Still there today, the roadway has a clear width of only 20 feet (6 metres), one factor in the construction of its upstream concrete replacement in 1992.

Goondiwindi has a history of border controls. Between 1862 and Federation in 1901, the Queensland government sought to collect customs duty on goods such as tea and tobacco, goods which were believed to be entering Queensland from the south where less duty was paid. A customs office was established at Goondiwindi in the early 1870s. The collection of customs duties was made easier when the ferry serving the Macintyre River crossing was replaced by its first timber bridge in 1880. Today’s Customs House Museum adjacent to the crossing, though lacking formal links with the collection of customs, serves as a reminder of that time.

1919 quarantine restrictions in Queensland were announced in February and not lifted until July of that year. A tent was erected on the new bridge over the Macintyre River and traffic was forced to use one lane. The Goondiwindi quarantine camp was established in the hospital grounds. At the bridge, Queensland residents arriving from the south had to declare that they were indeed residents of Queensland and pay, in advance, money to ensure the cost of their maintenance while in the camp, this before being allowed to cross the bridge from New South Wales.

So why the footwear? The price tags on the boots would indicate that one enterprising Goondiwindi salesman had identified a demand for footwear, separating out his goods—men’s, women’s and children’s shoes and boots—to serve any who might pass, or not as the case may be.